Imagine getting your class to think about a number topic in a real-life context and subsequently having students leave the lesson feeling happy they could use this skill.

About as real as the square root of minus one? Not if you relate it to breakfast* 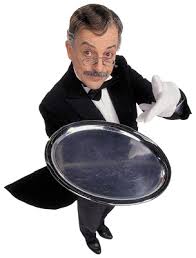 I wanted to make estimation more relevant for my class, a low ability Year 10. Outside my classroom I put a breakfast menu and my associate teacher took their orders** as they entered the classroom. I had put mini whiteboards on tables and I instructed the class to work out an estimate and the accurate total for their menu choice(s). The lesson had barely begun and the class were already talking about what they were doing (rather than Halloween antics the night before)!

Once everyone had arrived and settled down, I asked if anyone had underestimated and what this would mean – not enough money and doing the washing up!

I then asked each table how much their group order would cost. Would their overestimates cancel out their underestimates? Would the waiter get a tip? Meanwhile the associate teacher had added up the orders, so we could quickly check their calculations.

What if everyone paid £10? Would you have enough? How much tip would you be leaving? Would it cover a 10% service charge?

We followed up this task with some standard estimating questions.

The menus I used for the lesson are from a restaurant chain in California. The useful thing is there are no units of currency, so this works for different countries. It will work equally well with KS2 and KS3 pupils.

BTW The students decided if the waiter wanted a tip, he should actually feed them first!

*Strongly suggest you use this before students have break or lunch time, or else they’ll be drooling in their next lesson.

**Unless you are providing food, please add the disclaimer that you are not feeding them.