Have you noticed that textbooks are okay with graphs, until you need some interpreting graphs questions? 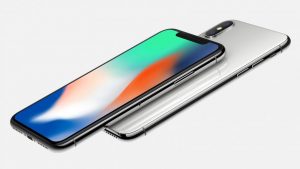 I thought that mobile phone tariffs would be a good starting point for comparing fixed charges and rates. Using the iPhone X as a starting point, I’ve put together a discussion starter and couple of additional questions. All the tariffs are actual offers available at the time of writing.

The graph is deliberately vague so that students can discuss trends without getting obsessed by the detail of the numbers. Everything is downloadable below.

*HEALTH WARNING*
You may require nerves of steel to complete this dramatic construction of a distance-time graph. A mental swear box may also be handy for everytime you resist the urge to say what you are thinking. Strong coffee is not advisable as you want to be the image of serenity, not a jittery wreck.

Ready? We shall begin …

Aim
To construct distance-time graphs from collected data and interpret the speed from a graph.

Please … don’t be disheartened if your activity starts like mine did! We got organised and went outside. I designated groups to stations and they started measuring, moving onto the next station when they were done.

A second group complained that the other groups were spending too long on measuring when they were waiting for a tape measure. I’d counted them out one per group – where was it?

‘Oh, we left that in the classroom’.
Mental gnashing of teeth.
‘Would that be the locked classroom?’ I ask
‘Yeah … we’ll get it’ off run two students
They come back complaining the classroom is locked!

Okay … we get the measuring done. Then they start running and timing. I check on one group and notice they are merrily taking all of their times away from ten minutes. They explain the mobile phone is counting down from ten minutes. Although I was impressed by their ingenuity, maybe changing the phone mode would have been more appropriate.

And let’s not mention the student who, on the final station, accidentally wiped all the results off the mini-whiteboard …

Then a miracle happened!

I collected their data together on a spreadsheet and projected it on the board. We discussed any anomalies and how we would progress. We decided neat printouts would help. They drew their graphs, colour coded their data and observed the gradient link to speed. I was very impressed by the speed at which they grasped this concept and proud of their (eventual) independent work.

Here is a sample of their work: 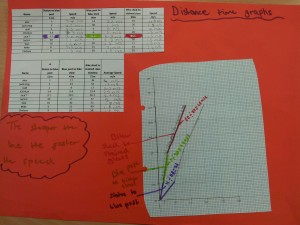 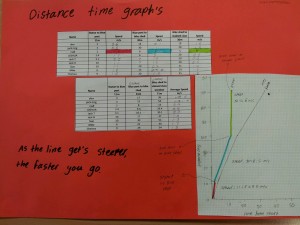 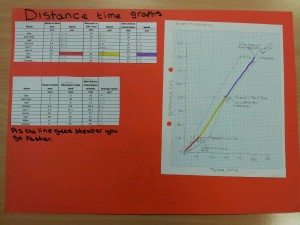 I can’t wait to share the resource I stumbled across this week. I had planned a lesson on distance-time graphs, for my Foundation GCSE class, at home and went into school to print out my resources, only to discover the photocopier was broken!  I went to the TES website and found this brilliant set of resources on distance-time graphs. They required a small amount of printing, but engaged a ‘bouncy’ class very effectively! 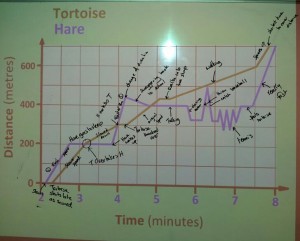 Go and try out these resources next time you are working with distance-time graphs!

Here is a quick photo prompt starter for you:
What does this picture make you think of? 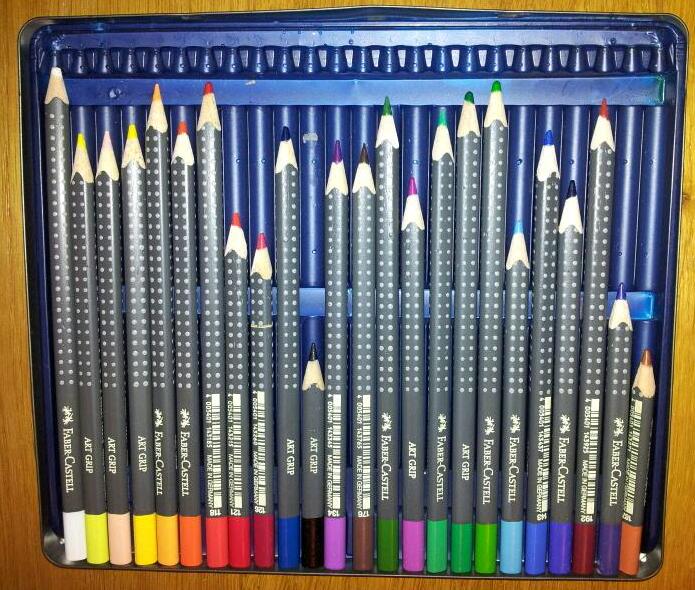 If you said favourite colour bar-chart or line graph, you’d be wrong.

The shorter the bar, the more popular the colour.

However turn it upside down and here is your line graph: 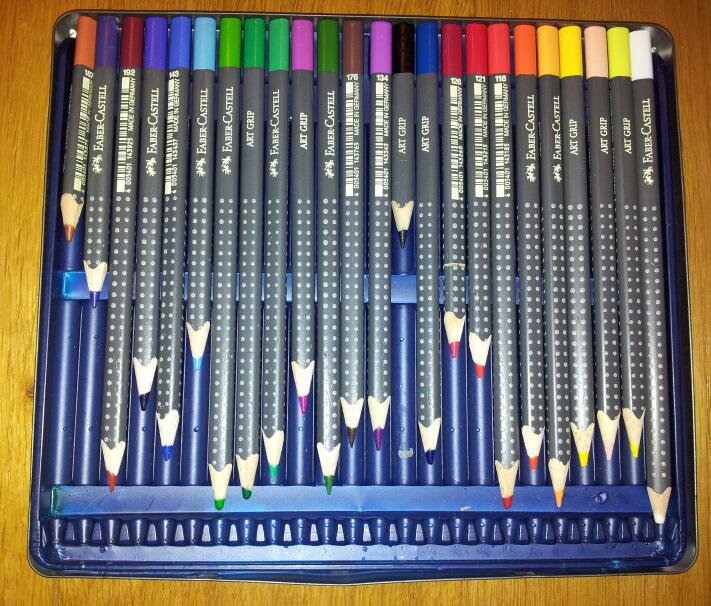 The heights of the blue bars are the amount of each colour used – hence more popular.

I haven’t actually lost a dime, rather I’m missing a Dime – specifically the second Dime probability pack. It was a great teaching resource for experimental probability from the first school I taught at. Unfortunately it is no longer available, although it is listed on the Tarquin archive site. Each student had a plastic tube with different coloured beads, a related experiment card and a record card. They could investigate the meanings of key vocabulary, carry out repeated trials and use this amazing graph paper, designed by Geoff Giles, to record results: 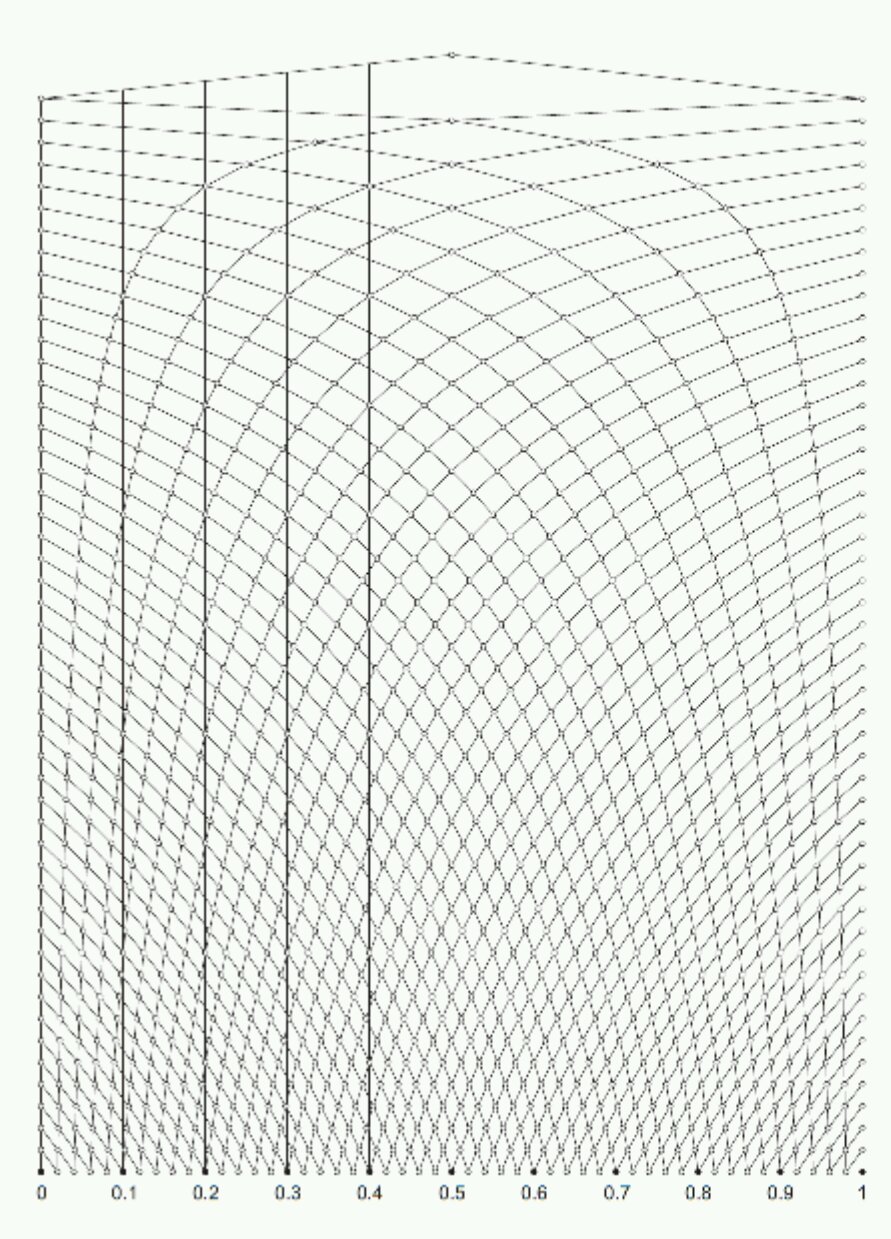 The graph paper works a little like a bagatelle or pinball machine. You start at the top ‘pin’. A success means move along the line to the next pin on the right, a fail means move to the left. You always move in a downwards direction. The more trials that are recorded, the further down you go. When you reach the bottom you will have carried out 50 trials and will be able to read off the experimental probability as a decimal. I found this blog (medianchoices of ict) with links to the Nrich website and interactive probability graphs. The graph paper from the Nrich site is here: RecordSheet.

I decided to recreate the old Dime investigation sheets: 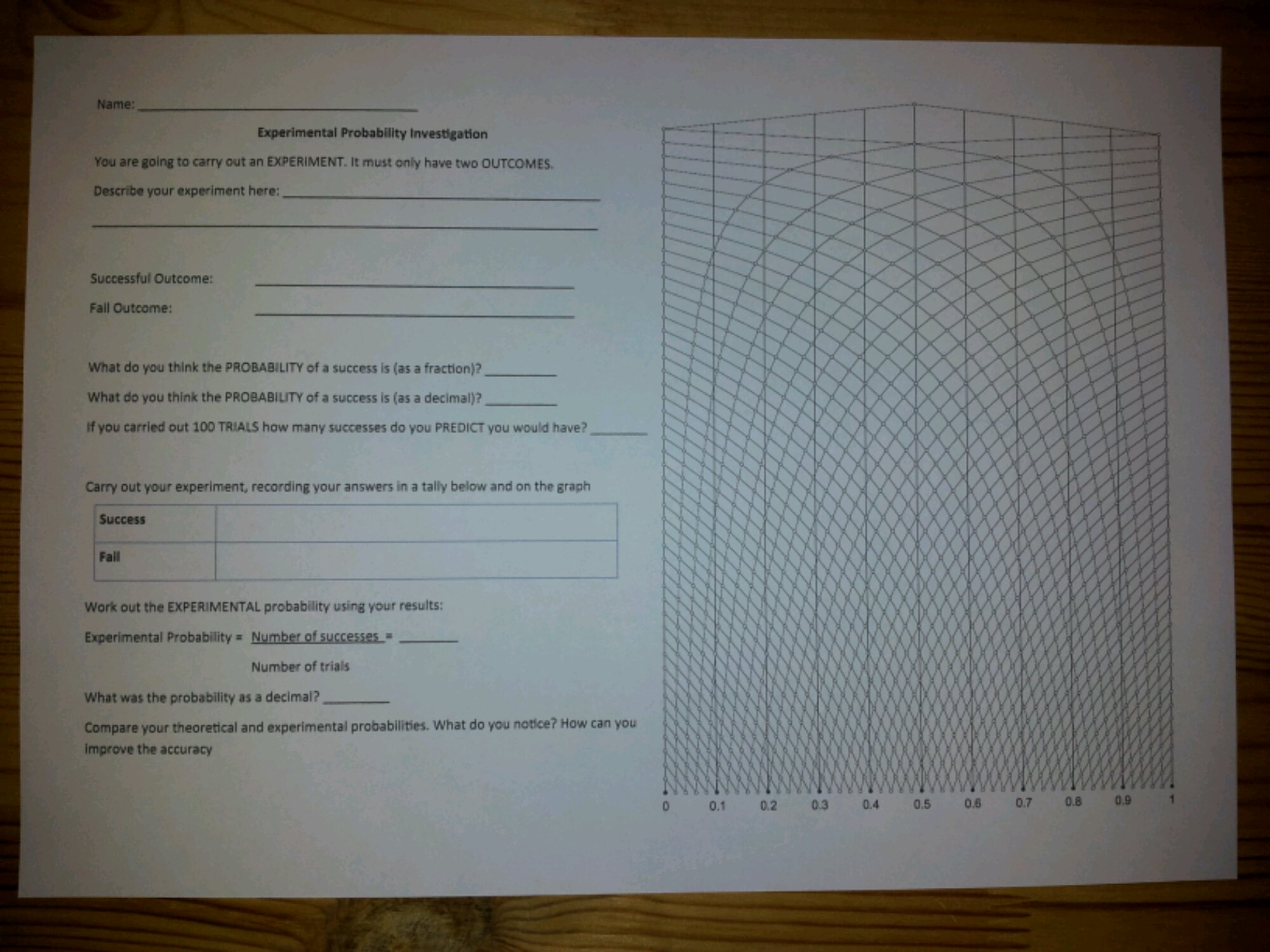 Students start by explaining what their experiment is and define what is a success/fail. They give the theoretical probability as a fraction and decimal, then predict the number of successes in 100 trials. 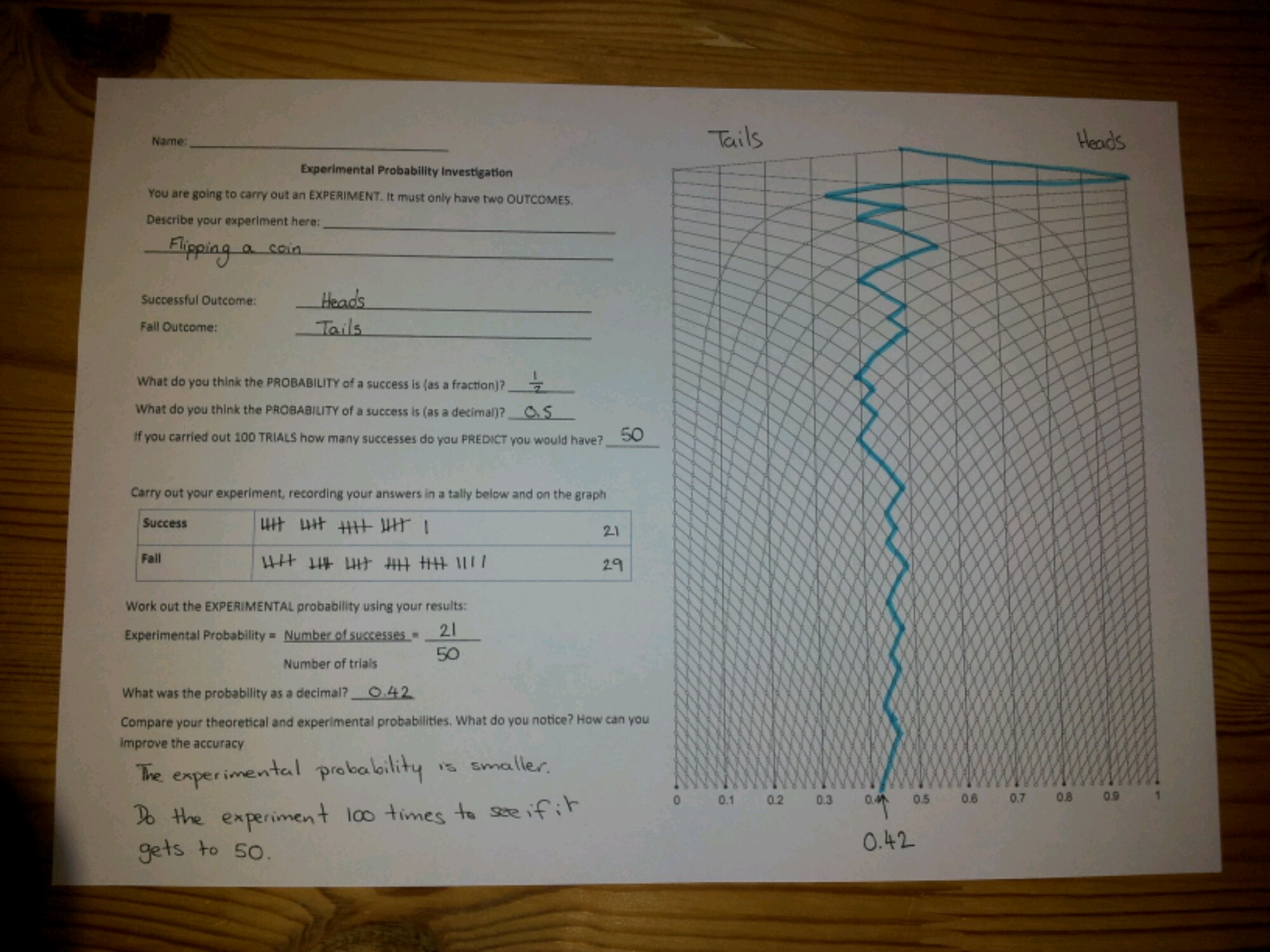 Getting pupils to draw axes drives me up the y-axis.

Right now I can sense people shaking their heads – why are you doing co-ordinate plotting if they can’t draw axes?

The problem is that they can draw axes, but for some pupils it takes about half an hour to get lines drawn with a ruler, axes marks equally spaced, lines (not gaps) numbered. For other pupils, their particular SEN means it’s a struggle using equipment. Should I be penalising pupils because they are slow to draw axes, when I know they’ll work brilliantly if I give them axes?

So I’ve put together an A4 sheet of axes. There are two identical sets: the x-axis goes from 0-10, the y-axis goes from 0-18. There is also space to write name and Question number so you can keep track of who has done what. I know there are many websites that will generate these for you on demand, but I’ve just used what was available to me at the time to make something that works for my pupils.

Here is a ridiculously simple classroom tip that was thought up by one of my pupils today.

The class were using past GCSE questions, compiled in a Word document, photocopied back to back and stapled.

After completing a table of values, the question said ‘Use the graph paper below…’, except the graph paper had ended up three sides of A4 away due to a crazy quirk of Testbase (GCSE exam question software) and Word. Cue much mumbling and enough paper shuffling to make me think a hamster was rearranging his bedding!

One pupil simply asked if she could take a picture of the table of values, so she wouldn’t have to keep flipping pages.