The Summer is here and obviously we switch off from teaching …
… Yeah, right!

You will see something and think – that will make a great lesson on (insert topic), then life will catch up and the idea will fade. The MathSandpit is here to help in such matters.

Take a picture of your inspiration with a few words, then tweet with the hashtag #MathsPics15.

In the Autumn, all the pictures, words and Twitter credits will be pulled together in a blog post. You will see your inspiration and that of other teachers. In the meantime, you will be able to search Twitter via the hashtag.

Have a great summer!

Are you a fan of ‘The Mr Men’? Are you a hopeless Maths geek? Get yourself over to SolveMyMaths!

I’m sure I’ve mentioned the brilliant Maths Mr Men and Little Misses before. Here is what I did with the set I printed and laminated (click on each picture to enlarge): 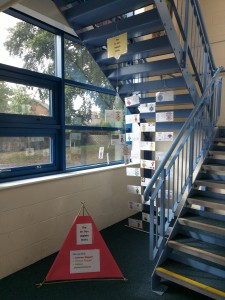 There are three sections to this display: the title tetrahedron, the mobile and the invisible wall. 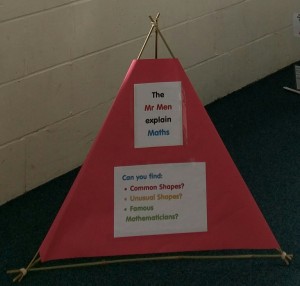 It’s a straightforward tetrahedron made from canes, with the corners secured with elastic bands. Then stick your title to the paper and wrap it around one face, trimming sticky-out bits and securing with tape. It ‘s a good way to make sure no one accidentally walks into your mobile.

My mobile is long and narrow because of the space I hung it in. The title hanger has been stretched into a rhombus shape and had a long loop of fishing line attached. The ends of the line were covered in white duct tape which you can see at the bottom of the title as a white triangle. The title was attached front and back.

The lower hangers were bent into a ‘C’ shape by pushing the straight base of the hanger upwards. Tape was wrapped near the ends of each arm to ensure the hanging shapes don’t slide along. Fishing line is threaded through the loops at the end of the arms and knotted. The knots are concealed inside the Mr Men cards, which were one sided. When I attach the remaining hangers to other things I squeeze the hook closed and cover the join in duct tape – it saves it unhooking later.

I found an old, split metre stick in the back of the stockcupboard and covered it in duct tape to make it safe. I marked out three Mr Men card widths across and attached long lengths of fishing line. The knots were held secure and camouflaged by more duct tape. I bent the two coathangers into the C-shapes mentioned earlier and hung them in the final position. The next bit is tricky – you need to knot your fishing line to each arm of the coat-hangers whilst ensuring you keep the line parallel and the hangers level. I found standing on the metre stick was very helpful!

That’s your invisible ‘wall’ set up – now for the wall display!

Attach your first two Mr Men cards between lines 1 & 2 and 3 & 4 by wrapping tape around the ends of the cards, encasing the line at the very end. Attach your third card above the first row between lines 2 & 3. Keep repeating until you wall is complete. I decorated the hangers with extra cards.

As you can see, my display is hanging off a metal stair case. For safety, I flattened the coat-hanger hook against the stair rise and sealed it with duct tape so no one will catch their toes.

I’ve already seen a student stand in-front of the display and discuss it with her teacher and lots of students are actively looking/reading as they go up the stairs. It’s only been up two days and it is a talking point. It’s sure to grow as there are more Mr Men & Little Misses that I haven’t yet printed.

I have a Pi-loving colleague who is a whizz with voting presentations.

Mr D created these review activities for use with A2/C3 students. The focus is logarithms, exponentials and Ln functions, including models for growth and decay. I particularly like the equation measuring boredness in a Maths lesson. It’s obviously wrong – how could a Maths lesson possibly be boring?

We paired up this presentation with Qwizdom voting handsets. If you don’t have them, you could try out Socrative and turn students’ mobile phones into voting handsets