Here’s a nice (gory) problem to use as a plenary.

What does the word ‘Decimate’ or ‘Decimation’ mean?

The word derives from Latin meaning ‘to remove one tenth’. 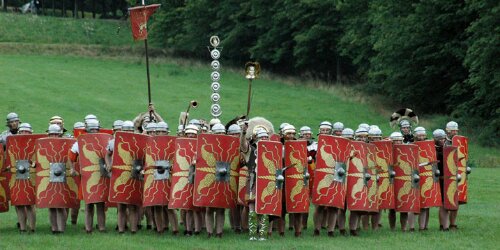 The original context is the punishment of a Roman Legion. The unit was divided into groups of ten and lots were drawn. The unlucky soldier was executed. A Cohort consisted of  480-500 soldiers, a Legion consisted of 10000 soldiers. How many would survive in a Cohort? How many would be executed in a Legion?

Now if the class were an unruly unit, how many would draw an unlucky lot?

A legend suggests that the Theban Legion was decimated in the third century AD. The Legion had refused, to a man, to accede to an order of the Emperor, and the process was repeated until none were left. They became known as the Martyrs of Agaunum (there are several sources on this).

Rather than execute your class I use this legend as a logic problem. Which pupil in the class is safe? Either the class stands, sitting when they are ‘executed’ or stand and then line up to leave. You can stop every few counts and ask who thinks they are safe. Last soldier standing leaves the lesson first!