Here’s a quick resource for consolidating and revising the area and perimeter of circles and semi-circles.

Pupils complete the worksheet then work out the code. I personally like having a clear glass Kilner-style jar with a combination padlock at the front of the class … with a little treat for the class to aim for securely locked inside!

As promised, I’ve been trying out ideas from TeachMeet North West at Calderstones School. Here’s the first post:

My colleague J had mentioned Discovery Puzzlemaker last term, but I’d not had time to try it out. Then Fiona Bate @fibate used it as part of her presentation on ‘Profound thinking in the classroom’.

How I used Puzzlemaker
I decided to test this out on my Year 9 students – they are a bright bunch and there are a lot of them. I put out tile puzzles on sheets of A5 and the class settled to the starter task, after they’d got their books out. There were lots of different strategies and eventually everyone cracked the code – the formula for the area of a circle. 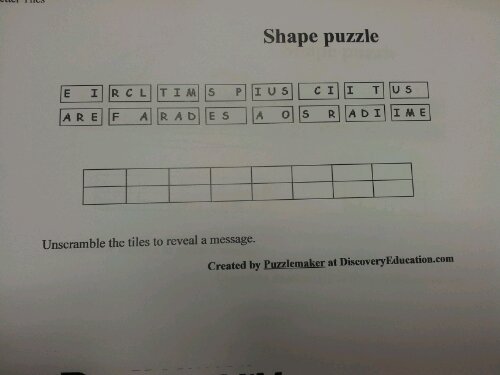 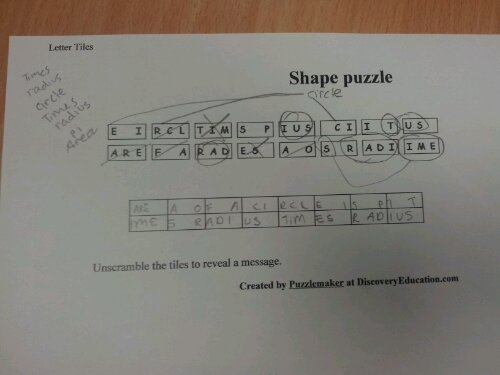 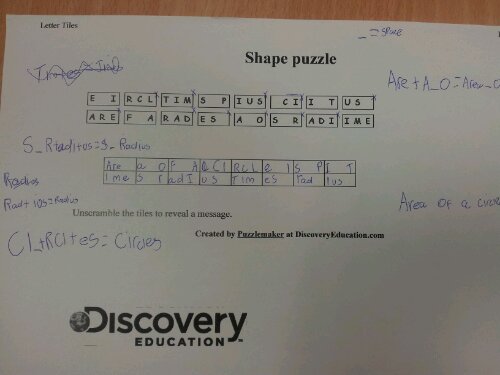 The funniest part was later in the lesson. A student put his hand up and said he couldn’t remember the rule for the area of a circle. More than one of his peers pointed out he’d just spent ten minutes cracking a code where the rule was given and it was still on his desk in front of him!

Lesson Objectives
Luke O’Hanlon @funkwalkee did a presentation on ‘Ways to engage with Learning Objectives’. This linked nicely with using Puzzlemaker to discover the aim of the lesson, as well as encourage independent learning and problem solving. Once the class had cracked the code they knew what they’d be doing that day. 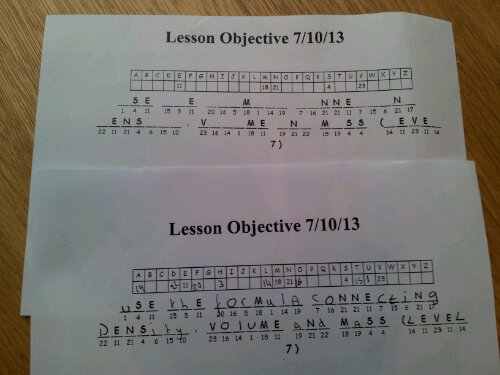 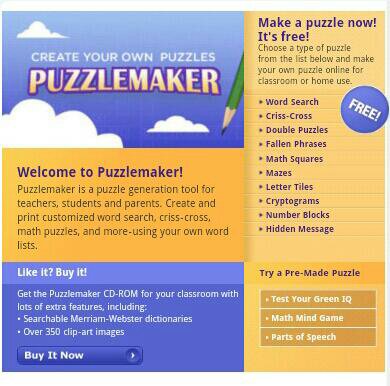 As you can see, Discovery Puzzlemaker is a really useful tool. I’m going to use some of the larger puzzles as homework tasks for my lower ability classes as I can tailor them to their specific needs. I’m starting with the ‘Hidden Message’ task to reinforce circle vocabulary.

Thank you to J, Fiona and Luke for sharing this site/their ideas.

A thing of geeky beauty today: 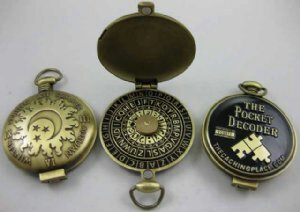 This is a Pocket Decoder for Geocachers, for codebreaking on the go! If you are not into geocaching, it’s still a thing of beauty. The dial is replaceable, meaning you can use it to crack a variety of codes.

A different way to look at data and probability is to introduce letter frequency analysis.

I set pupils the task of finding out the letter frequency data for the english language. Not much of a challenge for a bright student with the internet.

However …
I then gave them four A4 sheets of symbols to decode. Literally four pages of code, with no hints except they had to determine two literary works and authors from it. They had two weeks to solve it.

In hindsight, they described it as the best homework ever. I had parents contact me to see if they had solved it correctly – not to help their child, they were in competition to see who would get it first!

How to do it
Pick a text which is freely available on the internet – it saves typing out pages of text. I chose ‘Through the Looking Glass’ by Lewis Carroll – lots of interesting words!

I found a great website which gives you the Dancing man cipher amongst others. You paste in your text and select your substitution cipher. It then encodes your text for you. I chose the Dancing Man as it was the second literary work: The Adventure of the Dancing men (A Sherlock Holmes story)

I pasted this into Word and this formed the homework.

The interesting thing about this substitution cipher is that it has 52 symbols and no spaces. It is tricky to cheat as you would have to know the name of the cipher and the full cipher was not published in the book. There is more than one variation of the code as different people have tried to fill in the missing symbols.

Classics
This task ticks all the boxes for data processing, coding, independent study and literacy. In fact several pupils came back and said they had read Conan-Doyle’s classic work as a result of a maths task.